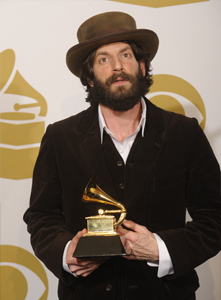 (born June 18, 1973) is an American singer-songwriter. LaMontagne has released four studio albums, Trouble, Till the Sun Turns Black, Gossip in the Grain and God Willin’ & the Creek Don’t Rise. He was born in New Hampshire and was inspired to create music after hearing an album by Stephen Stills. Critics have compared LaMontagne’s music to that of Otis Redding, The Band, Van Morrison, Nick Drake and Tim Buckley.

LaMontagne was born in Nashua, New Hampshire in 1973, one of six children raised by his mother. In his early teens he lived in Morgan, Utah and was more interested in drawing images of Dungeons & Dragons than in his school work. After graduating from high school, LaMontagne moved to Lewiston, Maine and found work in a shoe factory.

LaMontagne was inspired to quit his job and begin a career as a singer-songwriter after listening to Stephen Stills’ album Manassas. LaMontagne began performing in 1999, while maintaining a part time job as a tutor. In the summer of 1999, he recorded 10 songs for a demo album that was sent to various local music venues including Maine’s Oddfellow Theater, where he was hired as an opening act for John Gorka and Jonathan Edwards.

A business executive introduced LaMontagne to Chrysalis Music Publishing and in 2004 LaMontagne recorded the album Trouble with producer Ethan Johns and sold it to RCA Records in the USA and Echo Records in the UK. The album featured performances by Sara Watkins and Jennifer Stills, daughter of musician Stephen Stills. The album sold over 250,000 copies in the USA and 500,000 worldwide. During a 2005 tour, LaMontagne performed on the TV show Austin City Limits.

An EP of LaMontagne’s performance at the Bonnaroo Music Festival was released in 2005 and his song “All the Wild Horses” was part of the soundtrack for the TV series Rescue Me and the 2009 film The Boys Are Back. His song “Trouble” appeared in the TV series Alias and his song “Jolene” was heard in the credits of the 2010 film The Town. His song “Hold You in My Arms” was featured in the 2006 movie, She’s The Man.